At long last, I’ve come to the end of the project 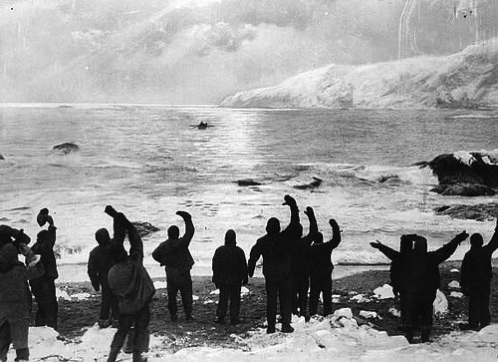 , a bit more than seven years since I started. 999 in the Dewey Decimal system is “Extraterrestrial Worlds” but at my library, the end was in Antarctica instead. The last book, it turns out, has an incorrect call number labeled on its spine and is identified as 999 S instead of 998 S. However, even if it were correctly labeled it would still be the last book so I picked it up to read.

Shackleton’s expedition was a failure with the expedition’s boat The Endurance crushed in the sea ice before they even reached Antarctica itself. When it became obvious that the ship was lost, the crew salvaged what they could and made their way across the ice rather laboriously until they were able to get off the ice and ended up sailing to a deserted and inhospitable island on the coast of Antarctica before a small crew navigated to South Georgia Island and made their first contact with civilization. Everyone from The Endurance survived the disaster.

The crew who were assigned to lay down supply depots on the opposite side of the Antarctic continent were less fortunate, with three members of that group lost in the snow.

The whole thing reads like an adventure story, the first part more vivid than the second. It had the kind of tone that I can imagine appealing to the young Tom Sawyer who might lead Huck Finn into snowbound wastelands after reading it. At the same time, there’s the specter of the first world war hanging over the expedition with the men being largely cut off from civilization and not really learning of the war and its horrors until after their rescue and the unspoken imperialist attitudes of the explorers that, of course, it was their right to “conquer” the frozen terrain of Antarctica.

Having reached the end of this project, a few notes in retrospect.

I had originally planned this to be the basis of a gonzo experiential memoir, akin to A. J. Jacobs’s The Know-it-all or The Year of Living Biblically, but I realized early on that it was going to end up being deadly dull as such a project. I’m not especially thrilled even with the blog posts that did end up being the sole output.

But along the way, I did find myself reading and learning things I might not have otherwise encountered and it was a good exercise in controlled serendipity exemplified most dramatically in the letter I wrote that turned into the post for The Useful Book. I think with this project over, I’m going to let my reading go largely unfettered. I’ve been flooded a bit with books I’ve not gotten around to reading and the piles threaten bodily harm, so it’s time to read more of those books.