I’m drawing to a close on this project an 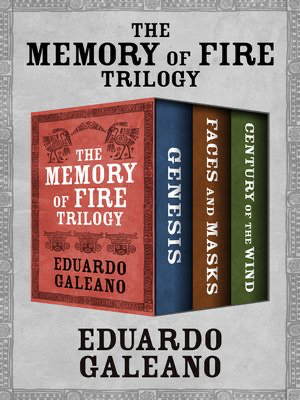 d for the 980s—South America—I saw this book which one of the back cover blurbs describes as “taking vital parts out of everything that has been written on the discovery and settlement of America … arranging them in a kind of verbal collage … something that defies classification into a genre.”

This was enough to catch my attention and the book delivered on its promise. Beginning with pieces of pre-Columbian myth, legend and memory and building from there, Galeano created a vital accounting of the history of the Americas from the dawn of time until the late twentieth century. Officially, I only read the first volume of the trilogy for the Dewey Decimal project, but I was so captivated, I read the last two volumes as well. There was a great deal that was unknown to me—my history classes in school focused pretty much exclusively on Europe (mostly Western Europe) and the United States. And even with a broader knowledge of Latin American history, there would still be much to catch my attention because Galeano is as likely to have his attention caught by the tale of an Argentine socialite who absconded with a young Jesuit priest and became pregnant with his baby only to end up executed by firing squad at her lover’s side, as he is to consider the history of Christopher Columbus, Simon Bolivar or Fidel Castro.

I feel like this is the book that A People’s History of the United States could have been, something that manages to tell its story through both the “great” men and the commoners, that doesn’t elide the unpleasant aspects of the hemisphere’s history while also giving due to the incidents that most historians would ignore.

Of all the books I’ve read in the course of this project, this is the only one that I’m planning to buy my own copy of, although when I re-read it, I’ll read the original Spanish text.