This was my first read for this project after the 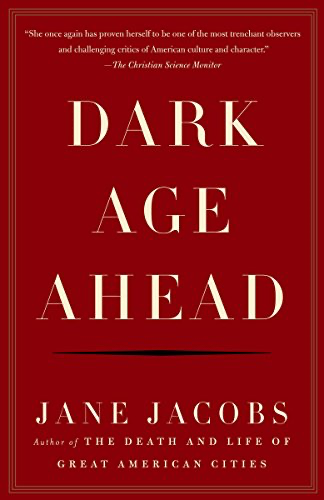 ibrary reopened after the first Covid shutdown. In the apocalyptic summer of 2020, this seemed an appropriate introduction to the final 100 of the Dewey Decimal System—history.

Written in 2004, Jacobs was warning of an impending “dark age” where we wiykd see a collapse of society through cultural amnesia.

The future is notoriously difficult to predict, and Jacobs, has her flaws as a futurist. Certainly, she failed to see the danger of the rise of Trumpism and anti-democratic movements both in the U.S. and across the world, but while her specifics were often off, she did accurately assess broad issues with the culture that persist with or without Trumpism and even with the anti-democratic forces still a threat, other issues continue to be problematic. Certainly, in the midst of the pandemic, seeing many in power insist that economic continuity trumped all was a shining example of what Jacobs called bad science.