Another month has come 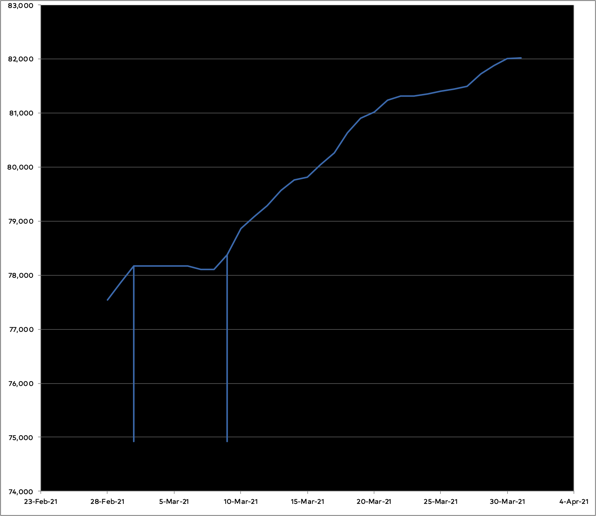 and gone and I continue to make decent progress on the novel. I have yet to miss a day’s work so far this year. I’ve finished the rewrite and revision of chapter 25 and done a lot of writing on chapter 26. I’m pretty sure that this chapter is going to be the longest in the book, I’m guessing around 10,000 words. This month’s graph of the progress ends up looking a lot like a skinny apatosaurus.

I’ve also gotten into a big pile of late research. I stumbled on Nelson Peery’s memoir, Black Fire, by a bit of serendipity and that’s led to a whole host of background research on African-American soldiers during World War II.

Short story work? It progresses, but the story that I’d hoped to have ready to workshop back at the end of January is still not finished although I can see the end of the current draft looming. Right now it’s 7,766 words long and the current draft may hit 9,000 words but I think that this should be a story at most half that length. The rewrite process is going to be a lot of cutting. Meanwhile, I’ll need to dig something up to workshop next week.

Still no acceptances on the stuff that’s been sent out this year. I have gotten at least one tiered rejection from a journal that had previously only ever sent form rejections, so I feel confident that that piece in particular will see an acceptance before the end of this round of submissions.