And now I’m moving on from Spanish/Portuguese to Latin in the literature part of the Dewey Decimal System. (As an aside, it’s interesting to note the cultural biases implicit in Dewey. the 800s—literature—follow a similar structure to the 400s—language—with a decade each for German, French, Italian, Spanish/Portuguese, Latin and Greek with all other languages crammed into a single decade and only a single left of the decimal category to hold, for example, all the Indo-European and Celtic languages of Europe. That a whole decade is dedicated 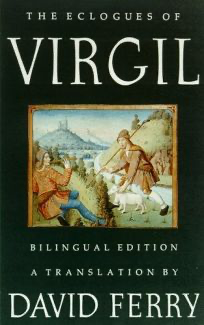 But I’m an odd bird. As an undergraduate, I studied Latin and Greek (the latter not very successfully and the former arguably not so successfully either). I was once upon a time able to stumble through Cicero and Ovid in Latin and I’ve made some tentative efforts at reclaiming my Latin including as part of this project (I’m also slowly working through St Jerome’s translation of the Bible into Latin).

I’ve managed to have not read Virgil other than a handful of excerpts here and there, and I have an unread copy of a translation of The Aeneid on my to-read shelves. The Eclogues are something that I’d read absolutely none of so I grabbed this off the shelf to read.

I have to confess that laziness led me to largely ignore the Latin side of this bilingual edition. I did look occasionally at the Latin, but mostly I focused on reading the English side. It was a delightful excursion during the waning days of the pre-Covid era and while I have only a handful of vague memories from that reading, I do recall finding it an interesting read and I think that should I manage to beef up my Latin in what remains of my life, I may return to The Eclogues to read it in Latin without an English text to crib from.