Song of the Month: Lavender by Marillion from Misplaced Childhood

Misplaced Childhood is, I think, the best of the neo-prog albums that came out after the first wave of prog, with a great mix of accessibility and extravagance. And somehow, with all of that, and the fact that the album is essentially a single long song (split in two in the original release but performed without break on CD version of the live album The Thieving Magpie) somehow didn’t keep them from producing a couple charting singles in the midst of the 1980s when even Genesis and Yes had become more pop than prog.

The BBC’s Top of the Pops, from which the above performance is taken, is an interesting bird. The performances are mimed to pre-recorded tracks (eagle-eyed viewers will notice there are no cables plugged into Steve Kelly’s keyboards) and for this performance, lead singer Fish had lost his voice and even though he was miming the performance decided to use a big pad of paper to present the lyrics he was “singing” to the audience. It’s a brilliant piece of stagecraft and should I ever perform with a band again, it’s something that I fully intend to shamelessly steal.

Song of the Month: Somebody’s Baby by Jackson Browne from Solo Acoustic Vol. 2

Something new. Once a month I’m going to highlight a song from my music collection that’s worth a listen or twenty.

To start things off, I’m going with a solo acoustic version of Jackson Browne’s “Somebody’s Baby.” The song was originally released as part of the soundtrack for Fast Times at Ridgemont High which I don’t think I saw until a few years later when it showed up on cable. I still have no idea where in the movie the song appears.

This version, with all the 1980s production stripped out manages to catch the emotional core of the song, the longing and desire for the unattainable.

For me, the song is forever attached to my own high school experience. It received steady airplay all through my freshman year of high school and is forever engrained in my mind with my memories of a girl in my Advanced Algebra class who I had a secret silent crush upon, which I could never act upon because she seemed an ethereal being beyond the grasp of a mere mortal such as myself and she was a junior while I was a mere freshman so even if I weren’t afraid of talking to girls, there was no hope that she would respond positively to me asking her out.

I remember that she wore skirts and dress blouses to school every day except Wednesdays, a conundrum that was finally unravelled when I discovered that she was in the work experience program at the school that had her working part time at a local bank for class credit (in the 1980s it was typical for banks to be closed on Wednesdays, thus her casual attire on that day).

There was another student in my math class who also had an obvious case of lovesickness for her, which as far as I could tell, he also never acted upon. He had a somewhat nerdy demeanor and felt kind of like a potential future version of myself from my vantage point. I would like to imagine that he eventually managed to work up the courage to ask her out and they began a wonderful relationship, but most likely no such thing ever happened.

Jeannie and Anthony, this song is for you. 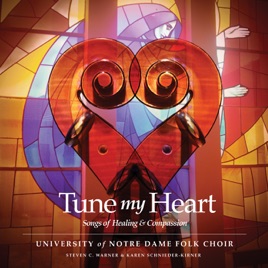 A couple weeks ago at mass, there was a song new to me, “Take from my Heart,” by Karen Schneider Kirner and John T. Kyler. The credits indicate that the lyrics are adapted from the “Act of Resignation” by Catherine McAuley. It managed to be the perfect blend of lyric and melody to really touch me in a time when I had forgotten that music could do this, at least not church music.

So much contemporary Catholic liturgical music has lyrics which are scriptural paraphrase and end up, over time, being a bit dulling to me. There are a handful of songs which have some turn of phrase or melody that reached me, but it feels like a long time since I’ve had some church music do that for me, so I felt like I should call out this song as something special which I’m thankful for. I’d also note that the publisher on this is World Library Press who I tend to associate with the drabbest of the drab when it comes to liturgical music, so this was an especial surprise.